The White House reportedly told the Defense Department that it needed to send away the the USS John McCain so that it was not around when President Donald Trump visited Japan. Named after Trump’s Republican critic, the ship had to be “out of sight” by the time Trump arrived for a visit to the Yokosuka… 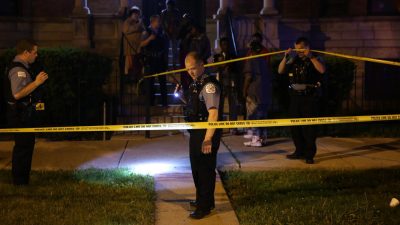 During the lengthened Memorial Day weekend, Chicago police responded to 42 people shot, seven of whom died of their injuries.

The violence was slightly above average for this time of year, according to homicide data indexed by the Chicago Tribune.

Chicago Mayor Lori Lightfoot told reporters on Monday that the surge in violent crime over the weekend “is just an unacceptable state of affairs.”

“I certainly knew that before, but to see it graphically depicted is quite shocking and says that we’ve got a long way to go as a city,” she said. “This is not a law enforcement-only challenge. It’s a challenge for all of us in city government. It’s a challenge for us in communities to dig down deeper and ask ourselves what we can do to step up to stem the violence.“

Lightfoot stressed that gun violence is not…

Police in Norway and Holland have opened formal investigations into the whereabouts of a Dutch cybersecurity expert and senior associate of WikiLeaks, who disappeared without trace on August 20.

Protesters demonstrate in support of Wikileaks Founder Julian Assange outside Southwark Crown Court where he was today sentenced on May 1, 2019 in London, England. Wikileaks Founder Julian Assange, 47, was sentenced to 50 weeks in prison for breaching his bail conditions when he took refuge in the Ecuadorian Embassy in 2012 to avoid extradition to Sweden over sexual assault allegations, charges he denies. The UK will now decide whether to extradite him to US to face conspiracy charges after his whistle-blowing website Wikileaks published classified US documents. (Photo: Jack Taylor/Getty Images)
The U.S. government on Thursday unveiled an 18-count indictment against WikiLeaks founder Julian Assange, charging him under the 1917 Espionage Act for his role in the 2010 publication of a trove of secret documents relating to the Iraq and Afghanistan wars and diplomatic communications regarding dozens of nations. So extreme and unprecedented are the indictment’s legal theories and likely consequences that it shocked and alarmed even many of Assange’s most virulent critics.

The Secret Money Behind the Push to Ban Abortion

An index from the Institute for Southern Studies

Carrie Severino leads the Judicial Crisis Network, a 501(c)(4) secret-money „social welfare“ nonprofit that has spent millions of dollars promoting conservative judges and plays a key role in the campaign to ban legal abortion in the U.S. The image is a still from a 2018 C-SPAN interview in which Severino defends her group’s refusal to disclose its dono…