Texans against the Nazis

Texans against the Nazis

Mario Ovalle reports from Rockwall, Texas, on an counter-protest mobilized to confront an anti-immigrant demonstration organized by neo-Nazis. 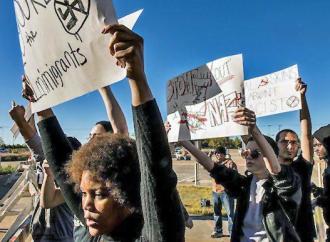 Texas anti-racists take a stand against the neo-Nazis

SOME 100 people mobilized to the town of Rockwall, Texas, northeast of Dallas, on November 8 to confront an anti-immigrant rally held by the neo-Nazi National Socialist Movement (NSM).

The NSM has its roots in a 1967 split from the American Nazi Party (ANP) following the murder of ANP founder and former Navy commander George Lincoln Rockwell. In recent years, the NSM has grown following the decline of the National Alliance and the Aryan Nations after the death of the organizations‘ leaders in 2002 and 2004. The NSM is now the largest neo-Nazi organization in the U.S. according to the Southern Poverty Law Center, with its own presidential candidates and 61 chapters…

Taken at the height of World War Two and after Adolf Hitler had taken Paris, this picture depicts Hitler surveying his conquest with his various cronies and became one of the most iconic photos of the 1940s and World War 2.

This powerful image of the death of the last Jew in Vinnitsa, Ukraine, was found in the album of an Einsatzgruppen soldier. The name of the image comes from the label at the back of the photo, and succinctly conveys what happened in Vinnitsa: all 28,000 of the Jews living there were killed.

Shot in 1943, this is one of the best-known pictures of World War Two, as it depicts the terror inspired by the Nazis. The image above shows the destruction of the Warsaw Ghetto, which was the forced home to thousands of Polish-Jewish citizens. Though the most poignant part of picture is the frightened little boy in the foreground with his hands up as he is forcibly removed from his hiding place.

Take a boat ride out from the Nigerian port of Lagos and it is easy to see why piracy, sea robbery and other forms of maritime crime are such a problem.

The ocean is swarming with cargo ships, oil tankers, barges and other vessels waiting for permission to enter the overcrowded port.

Great hulks of rusting metal, anchored and sitting low in the water, almost as if they are inviting pirates to sling their ladders over the side and clamber up on board.

„At around 2am I heard banging on my cabin door: Boom, boom, boom, boom. ‚Pirate attack, pirate attack‘. They seized the captain, who was Russian, and the Ukrainian chief officer.“ … read more: http://www.bbc.com/news/world-africa-30024009#