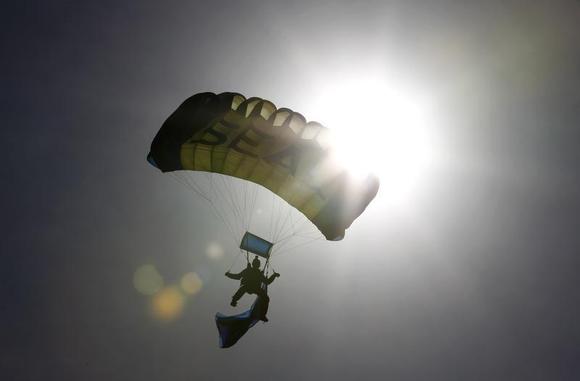 A Navy SEAL takes part in a demonstration in Florida November 11, 2011.

TAMPA, Florida (Reuters) – Suicides among U.S. special operations forces, including elite Navy SEALs and Army Rangers, are at record levels, a U.S. military official said on Thursday, citing the effects of more than a decade of „hard combat.“

The number of special operations forces committing suicide has held at record highs for the past two years, said Admiral William McRaven, who leads the Special Operations Command.

„And this year, I am afraid, we are on path to break that,“ he told a conference in Tampa. „My soldiers have been fighting now for 12, 13 years in hard combat. Hard combat. And anybody that has spent any time in this war…

I questioned the Russian president live on TV to get his answer on the record, not to whitewash him

„Truth is coming, and it cannot be stopped“ – Edward Snowden – NSA whistleblower

On Thursday, I questioned Russia’s involvement in mass surveillance on live television. I asked Russia’s president, Vladimir Putin, a question that cannot credibly be answered in the negative by any leader who runs a modern, intrusive surveillance program: „Does [your country] intercept, analyse or store millions of individuals‘ communications?“

I went on to challenge whether, even if such a mass surveillance program were effective and technically legal, it could ever be morally justified.

The question was intended to mirror the now infamous exchange in US Senate intelligence committee hearings between senator Ron Wyden and the director of national intelligence, James Clapper, about whether the NSA collected records on millions of Americans, and to invite either an important concession or a clear evasion. (See a side-by-side comparison of Wyden’s question and mine here.)

Clapper’s lie – to the Senate and to the public – was a major motivating force behind my decision to go public, and a historic example of the importance of official accountability.

In his response, Putin denied the first part of the question and dodged on the latter. There are serious inconsistencies in his denial – and we’ll get to them soon – but it was not the president’s suspiciously narrow answer that was criticised by many pundits. It was that I had chosen to ask a question at all.

I was surprised that people who witnessed me risk my life to expose the surveillance practices of my own country could not believe that I might also criticise the surveillance policies of Russia, a country to which I have sworn no allegiance, without ulterior motive. I regret that my question could be misinterpreted, and that it enabled many to ignore the substance of the question – and Putin’s evasive response – in order to speculate, wildly and incorrectly, about my motives for asking it.

The investigative journalist Andrei Soldatov, perhaps the single most prominent critic of Russia’s surveillance apparatus (and someone who has repeatedly criticised me in the past year), described my question as „extremely important for Russia“. According to the Daily Beast, Soldatov said it could lift a de facto ban on public conversations about state eavesdropping.

Others have pointed out that Putin’s response appears to be the strongest denial of involvement in mass surveillance ever given by a Russian leader – a denial that is, generously speaking, likely to be revisited by journalists.

In fact, Putin’s response was remarkably similar to Barack Obama’s initial, sweeping denials of the scope of the NSA’s domestic surveillance programs, before that position was later shown to be both untrue and indefensible.

So why all the criticism? I expected that some would object to my participation in an annual forum that is largely comprised of softball questions to a leader unaccustomed to being challenged. But to me, the rare opportunity to lift a taboo on discussion of state surveillance before an audience that primarily views state media outweighed that risk. Moreover, I hoped that Putin’s answer – whatever it was – would provide opportunities for serious journalists and civil society to push the discussion further.

When this event comes around next year, I hope we’ll see more questions on surveillance programs and other controversial policies. But we don’t have to wait until then. For example, journalists might ask for clarification as to how millions of individuals‘ communications are not being intercepted, analysed or stored, when, at least on a technical level, the systems that are in place must do precisely that in order to function. They might ask whether the social media companies reporting that they have received bulk collection requests from the Russian government are telling the truth.

I blew the whistle on the NSA’s surveillance practices not because I believed that the United States was uniquely at fault, but because I believe that mass surveillance of innocents – the construction of enormous, state-run surveillance time machines that can turn back the clock on the most intimate details of our lives – is a threat to all people, everywhere, no matter who runs them.

Last year, I risked family, life, and freedom to help initiate a global debate that even Obama himself conceded „will make our nation stronger“. I am no more willing to trade my principles for privilege today than I was then.

I understand the concerns of critics, but there is a more obvious explanation for my question than a secret desire to defend the kind of policies I sacrificed a comfortable life to challenge: if we are to test the truth of officials‘ claims, we must first give them an opportunity to make those claims.

How a Group of Strangers Stopped One Man From Being Deported

The other passengers on the flight staged a peaceful protest to stop the airplane from taking off.

Ghalamere, who is Kurdish, left his birthplace of Iran two years ago due to what he says is persecution—including threat of torture and execution—for his past political activities. He relocated to Sweden, where he was living with his wife Fatemeh, who is a Swedish resident, and their two young children.

Swedish authorities claim that Ghalamere must leave the…

Guardian and Washington Post each honored with Pulitzer for Public Service

Ewen MacAskill, Glenn Greenwald and Laura Poitras in Hong Kong to meet NSA whistleblower Edward Snowden on June 10, 2013. (Photo by Laura Poitras) The Washington Post and the Guardian/US were both awarded one of journalism’s top honors on Monday—the Pulitzer Prize for Public Service— for their separate but related reporting on the NSA’s widespread surveillance documents leaked by NSA whistleblower Edward Snowden.

Journalists Glenn Greenwald, Laura Poitras and Ewen MacAskill from the Guardian and the Washington Post’s Barton Gellman sent shock waves across the globe for their reporting on the leaks—eliciting responses from citizens and governments alike and spurring a new era of backlash against government intrusion.

Following news of the honor, Snowden released a statement…

April 06, 2014 „Information Clearing House – „First Look“ – This week, the Associated Press exposed a secret program run by the U.S. Agency for International Development to create “a Twitter-like Cuban communications network” run through “secret shell companies” in order to create the false appearance of being a privately owned operation. Unbeknownst to the service’s Cuban users was the fact that “American contractors were gathering their private data in the hope that it might be used for political purposes”–specifically, to manipulate those users in order to foment dissent in Cuba and subvert its government. According to top-secret documents published today by The Intercept, this sort of operation is frequently discussed at western intelligence agencies, which have plotted ways to covertly use social media for ”propaganda,” “deception,” “mass messaging,” and “pushing stories.”

Tutu Condemns US Efforts to Curb Free Speech on Palestine
By Archbishop Desmond Tutu
April 06, 2014 „ Information Clearing House –  Archbishop Emeritus of Cape Town Desmond Tutu , a legendary figure in the struggle against apartheid in South Africa , issued this statement on 2 April 2014 condemning escalating legislative efforts in the United States to curb freedom of speech and ostracize those who support justice in Palestine.

I am writing today to express grave concern about a wave of legislative measures in the United States aimed at punishing and intimidating those who speak their conscience and challenge the human rights violations endured by the Palestinian people. In legislatures in Maryland, New York, Illinois, Florida, and even the United States Congress, bills have been proposed that would either bar funding to academic associations or seek…

An in depth investigation into the legal doctrine of joint enterprise

An eight-month investigation into the controversial doctrine reveals data about the extent of its use for the first time.

Joint enterprise is used to charge more than one person with murder.

The Bureau is a not-for-profit research organisation. It pursues in depth journalism which is of public benefit. All research and stories are freely available under a Creative Commons