The Excuse for Killing Trayvon Martin Has Become the Standard of Democracy | Common Dreams .

Statehouses are supposed to be America’s laboratory, but the experiments are rigged. Since when is Stand Your Ground 2.0 the standard of justice?

An amendment in the Florida legislature tells us all we need to know about why stand-your-ground laws exist in the first place: to escape punishment for something that most people recognize is wrong. (Photograph: Zhao Hanrong / Xinhua / Corbis)The Florida House recently passed legislation that would seal the records of anyone who successfully sustains a stand-your-ground defense after a shooting. The proposal would allow a gun-wielding vigilante to escape not just any and all legal complications but also awkward interactions with curious neighbors. So… 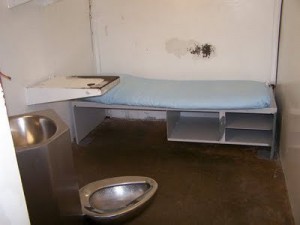 The Supreme Court has ruled that the death penalty itself does not constitute “cruel and unusual punishment.” Yet the treatment of the condemned is nonetheless subject to Eighth Amendment protections, as well as Fourteenth Amendment guarantees of due process.

In the past few years, this ironic legal reality has been the subject of a renewed national debate centering on execution methods. The European drug companies that U.S. states have historically relied on to provide the materials for lethal injections have refused to replenish supplies. As a result, states have developed new drug protocols, often implementing them without testing or research. Last month, Dennis McGuire struggled and gasped for well over ten minutes before he finally died.

But at a recent Senate Judiciary Subcommittee hearing, exoneree Damon Thibodeaux called attention to a different, rarely-discussed aspect of death…

There will be no more hunger strikes at Guantanamo Bay, according to a new document first reported on Monday night. Not because the the detainees of the military prison are giving up on the tactic, though. Instead, the military is transitioning to referring to hunger strikes as “long-term non-religious fasts.”

The shift was first reported on the newly minted VICE News which obtained a copy of the document that contained the change, a standard operating procedure (SOP) manual innocuously titled “Medical Management of Detainees With Weight Loss.” Under the new guidelines, according to VICE, the previous liberal use of the phrase “hunger strike” had vanished. Instead, the base’s Joint Medical Group (JMG)…

Published on Thursday, March 6, 2014 by TruthDig.com

44 Years a Prisoner: The Case of Eddie Conway

Marshall “Eddie” Conway walked free from prison this week, just one month shy of 44 years behind bars. He was convicted of the April 1970 killing of a Baltimore police officer. Conway has always maintained his innocence. At the time of his arrest and trial, he was a prominent member of the Baltimore chapter of the Black Panther Party, the militant black-rights organization that was the principal focus of COINTELPRO, the FBI’s illegal “counterintelligence program.” The FBI, under the leadership of J. Edgar Hoover, surveilled and infiltrated Black Panther chapters from coast to coast, disrupting their organizing activities, often with violence.

(Image: Ars Skeptica/cc/flickr)
The prosecution alleged Conway was behind the fatal shooting of Baltimore police officer Donald Sager. The case hinged on the testimony of a police officer…

Wounded landscape: how Norway is remembering its 2011 Utøya massacre

Artist Jonas Dahlberg has been chosen to create three memorials, one of which cuts a 3.5m slit in the landscape, to remember the victims of Anders Behring Breivik

Model of Memory Wound, a 3.5m gap cut into the Sørbråten peninsula by artist Jonas Dahlberg as a memorial for the victims of the 2011 massacre. Picture: Jonas Dahlberg Studio

A Swedish artist has been selected to create official memorials at the sites of the 2011 Norwegian massacres carried out by right-wing extremist Anders Behring Breivik.

The competition, called Memorial Sites After 22 July, was won by Jonas Dahlberg, who will create three artworks at a cost of 27m Norwegian kroner (£2.7m) to the government in Oslo.

The most striking memorial is called Memory Wound. The 43-year-old artist has sliced a three-and-a-half-metre-wide slit into the Sørbråten peninsula, which faces the island of Utøya where Breivik killed 69 people. It marks a „symbolic wound“ in the landscape….

r 12% of human-related greenhouse gas emissions, primarily coming from land use change and deforestation caused by expansion of agriculture, as well as methane released by the animals themselves, with a lesser amount coming from manure management and feed production.

„There is a lot of discussion about reduction of meat in the diets as a way to reduce emissions,“ says IIASA researcher Petr Havlik, who led the study „But our results show that targeting the production side of agriculture is a much more efficient way to reduce greenhouse gas emissions.“