Monday on The Joe Rogan Experience podcast, skeptic and “debunker” Mick West linked conspiracy theories about the Federal Emergency Management Agency to Americans’ relative unfamiliarity with the mechanics of human burials. He explained the “FEMA coffins” conspiracy on his website, Metabunk.org.

“The ‘FEMA coffins,’ which is grave liners that have been piled up, big piles of grave liners in a field somewhere,” West explained. “Some people say they’re coffins that FEMA has been stockpiling, but they’re really just these plastic things they put over graves … All the young people, they don’t recognize these things because they don’t know anything about the burial process, so they think… 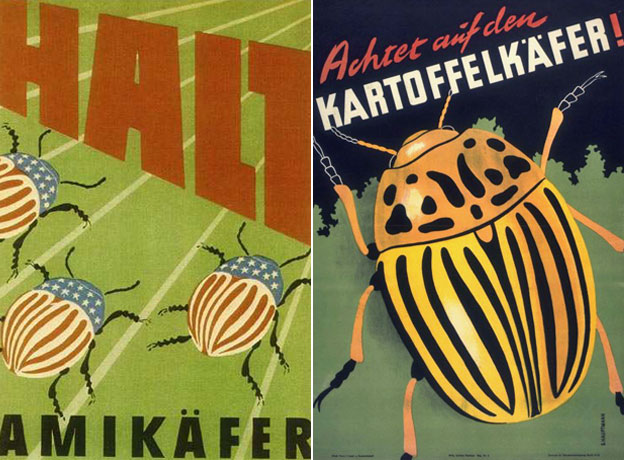 In 1950 the East German government claimed the Americans were dropping potato beetles out of planes over GDR fields in an attempt to sabotage their crops. Was it true, or an example of Cold War propaganda?

On 23 May 1950, farmer Max Troeger noticed two American planes flying over his fields in the East German village of Schoenfels bei Zwickau.

The next morning – according to an East German government leaflet – he was shocked to discover that his fields were covered with Colorado potato beetles, an insect which can devastate potato crops.

First described in 1824, the beetle had presented a major threat to European crops when it had first arrived with potatoes imported from the US in the late 19th Century.

I Have a Dream, a Blurred Vision.

I Have a Dream, a Blurred Vision

August 31, 2013 „Information Clearing House – The 50th anniversary of the March on Washington—in which Rev. Martin Luther King Jr. made his famed „I Have a Dream“ speech—has recently won renewed attention from various print and electronic media in the United States. But the more attention given to King’s extraordinary speech, the less we seem to know about King himself, the less aware we are about the serious challenges he was presenting, challenges that remain urgent and ignored to this very day.

The March on Washington took place on 28 August 1963. Despite repeated fear mongering by certain commentators and public officials who predicted there would be violence in the streets—over 250,000 people descended upon Washington D.C. in a massive show of unity and peaceful determination.

I was there. About two-thirds of the demonstrators were African-American, and about one-third were white. After all these years I still recall how gripped I was by the vast sweep of the crowd moving like democracy’s infantry across the nation’s capital, determined to awaken „our leaders“ in Congress and the White House.

The high moment of the day was Martin Luther King’s „I Have a Dream“ speech. It was a call to freedom and enfranchisement for a people who had endured centuries of slavery followed by segregation and lynch-mob rule. In his speech King reminded us that „the Negro is still languishing in the corners of American society and finds himself an exile in his own land.“

He went on: „The marvelous new militancy which has engulfed the Negro community must not lead us to distrust all white people, for many of our white brothers, as evidenced by their presence here today, have come to realize that their destiny is tied up with our destiny and their freedom is inextricably bound to our freedom.“

King continued to stoke the new militancy: „We can never be satisfied as long as a Negro in Mississippi cannot vote and a Negro in New York believes he has nothing for which to vote. . . . Now is the time to rise from the dark and desolate valley of segregation to the sunlit path of racial justice.“

At this, the crowd exploded with thunderous applause and wild cheers. Many of us were left overwhelmed and misty eyed. For all its clichés and overdone metaphors, King’s „I Have a Dream“ speech remains a truly great oration.

So impressive is the speech, however, that commentators and pundits to this day have found it easy to focus safely upon it to the neglect of other vital social issues that engaged King.

The opinion-makers prefer to treat Martin Luther King as an inspirational icon rather than a radical leader. He has been domesticated and sanitized. Today the real King probably would not be invited to the White House because he is too far left, too much the agitator.

In 1967, he was becoming an increasingly serious problem for the defenders of privilege and profit. King came out against the Vietnam War that year, a fact that is seldom mentioned today. His stance discomforted many liberals (black and white) who felt they should concentrate on civil rights and not alienate potential supporters with anti-war issues. But for King, the U.S. government had become „the greatest purveyor of violence in the world,“ spending far more on death and destruction than on vital social programs.

He differed with those who believed we could resist violence and cruelty at home while resorting to violence and cruelty abroad. He condemned „those who make peaceful revolution impossible,“ those who „refuse to give up the privileges and pleasures that come from the immense profits from overseas investments . . . the individual capitalists who extract wealth“ at the expense of other peoples and places.

By 1967 King was treading on dangerous ground. He was connecting the issues. He condemned „the triple evils of racism, economic exploitation, and militarism.“ The same interests that brought us slums also brought us wars, he argued, and they were getting richer for the doing.

By 1968, the year he was assassinated, King was also waging war against poverty. Civil rights, he dared to say, were linked to economic rights. He was planning a national occupation of Washington D.C., called the Poor People’s Campaign. Again he was treading on dangerous ground bringing together working-class people of various ethnic groups.

These class demands go unmentioned in the usual MLK commemorations. The „I Have a Dream“ oration now overshadows the other less known messages that King was putting forth not long before he was killed, including the search for economic justice for all working people. The great „dream speech“ of 1963 serves less as an inspiration and more as a cloak covering his latter-day radical views regarding class struggle and anti-imperialism.

In 1968, at the age of 39, Martin Luther King was killed by a sniper’s bullet while standing on the balcony of his motel room in Memphis, Tennessee. He was in Memphis to lend support to a sanitation workers strike, the very kind of thing his opponents were finding increasingly intolerable.

A penniless fugitive from the Missouri State Penitentiary, James Earl Ray, while being sought by the police, supposedly took it upon himself singlehandedly to make his way to Memphis where he somehow located King’s motel balcony and shot him from a room across the courtyard.

Then entirely on his own, supposedly with no visible financial support, the fugitive convict and newly established assassin made his way to England. Arrested in London at Heathrow Airport with substantial sums of cash in his pocket, Ray was extradited to the United States and charged with the crime. He was strongly advised by his lawyer to enter a guilty plea (to avoid the death penalty) and was sentenced to 99 years. Three days later he recanted his confession. Over the ensuing decades he made repeatedly unsuccessful efforts to withdraw his guilty plea and be tried by a jury. Ray died in prison in 1998, still proclaiming his innocence.

In 1986 King’s birthday was established as a national holiday. Hundreds of streets in America have been renamed in his honor. There are annual commemorations. His resonant voice, memorable words and gripping cadence are played and replayed. But the politco-economic issues he highlighted continue to be passed over by mainstream leaders and commentators.

In addition, the opinion-makers who celebrate King’s birthday every year and hail him as a monumental figure have nothing to say about the many unresolved questions related to his assassination. No one openly entertains the question of whether there were powerful people (certainly more powerful than James Earl Ray) who thought it necessary to do away with this popular leader because he had moved too far beyond „I Have a Dream.“

Michael Parenti is an award winning, internationally known author. His two most recent books are The Face of Imperialism (2011), and Waiting for Yesterday: Pages from a Street Kid’s Life (2013), a memoir of his early life.

Michael Snyder: 25 Quotes About The Coming War On Syria That Every American Should See.

August 31, 2013 „Information Clearing House –  If Barack Obama is going to attack Syria, he is going to do it without the support of the American people, without the approval of Congress, without the approval of the United Nations, and without the help of the British.  Now that the British Parliament has voted against a military strike, the Obama administration is saying that it may take „unilateral action“ against Syria.  But what good would „a shot across Syria’s bow“ actually do?  A „limited strike“ is not going to bring down the Assad regime and it is certainly not going to end the bloody civil war that has been raging inside Syria.  Even if the…